Under the umbrella of the Nelson Environment Centre, the revamped community bike hub at Saxton Fields will officially open on Tuesday 3rd May. The Bike Hub is a space for fixing up bikes and donating bikes back into the community. If you have a bike to donate or you are in need of a bike please get in touch bikehubnelson@gmail.com. For more information head to https://www.bikehubnelson.org. 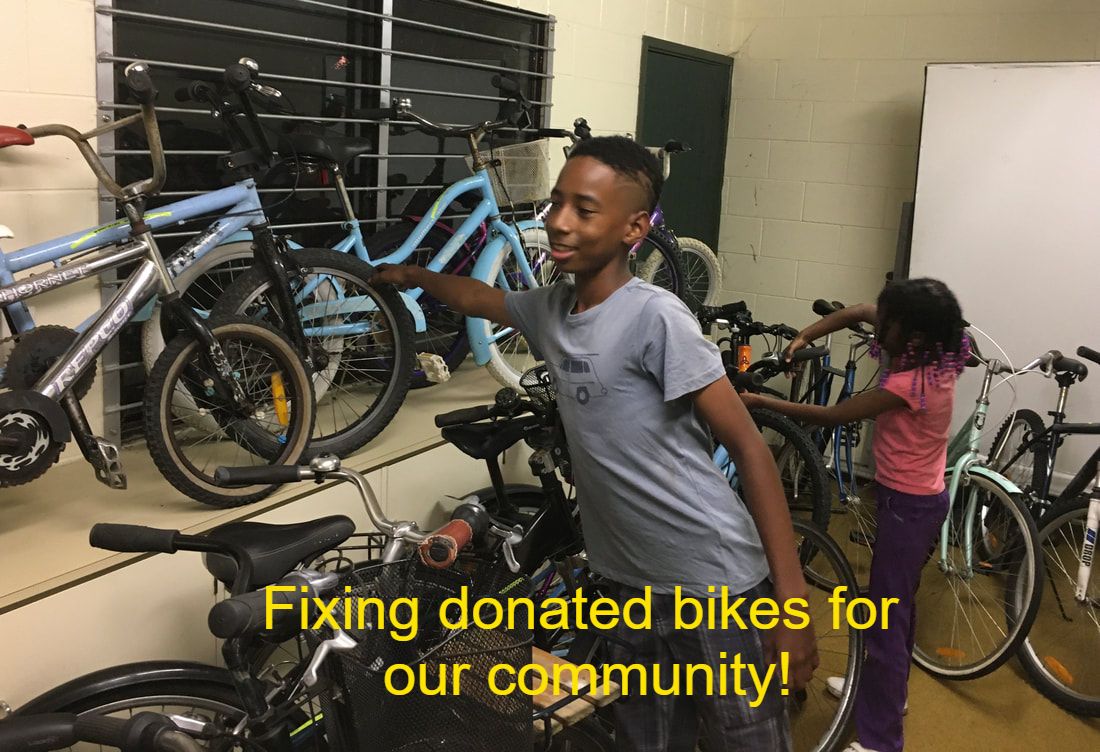 Our submission to Nelson City Council on on the Speed Limit Review can be viewed here https://drive.google.com/file/d/1s4jbZzIizGBPQrsOZjS2RV1V_DZmPLgL/view?usp=sharing

Please feed back to NZTA on the Nelson Future Access options by 5pm Friday 24th July https://nzta.mysocialpinpoint.com/nelson-future-access. We also encourage you to add your name to the campaign to Preserve the (Railway) Reserve https://www.change.org/p/campaign-to-retain-the-railway-reserve-preservethereserve

We have long opposed the Southern Link (now renamed The Inland Route) as we think the focus should be on encouraging more people to walk, cycle and use public transport. Creating new roads leads to more cars, more parking and the destruction of our green spaces as well as a detrimental effect on the health and well-being of our community.

What we do support is the 'Priority Lanes' package which will prioritise public transport at peak times. Until public and active transport are seen as a better alternative to traveling by private car we will remain in an endless environmentally damaging cycle of road building.

Thank you for this opportunity to comment on the proposed speed reductions along State Highway 6.
Bicycle Nelson Bays SUPPORTS the proposed speed limit reductions for State Highway 6 between Blenheim and Nelson, with the addition of the extension of the 60 kph zone between Dodson’s Valley Road and the roundabout at the intersection of Trafalgar Street. The reasons for our support for the speed reduction, including for the full section within Nelson city, include:
1. There is a large an growing group of road cyclists who cycle between Nelson/Richmond and the top of Whangamoa hill or beyond. There are areas of poor road-side shoulders and a reduced average speed would allow traffic more time to react and avoid cycles. Our experience shows that the majority of vehicles pass extremely closely to on-road cyclists, and so reducing the average speed of the traffic would reduce the risk to cyclists.
2. Where there are highways with no shoulders where people can bike, speed limits need to be lower to improve safety, unless the 1.5m recommendation for passing a cyclist become law. Clearly this recommendation is regularly flouted by vehicle drivers ‘pushing past’ people on bikes where the road narrows, instead of slowing briefly until reaching a safer passing site. The majority of SH6 has no adquate shoulder for cyclists to safely bike on.
3. A well known local road cyclist was struck and killed recently at the intersection of SH6 and the Glen road. Lower traffic speeds would have allowed more reaction/avoidance time on a corner with poor sight lines around the adjacent corner.
4. A vehicle travelling from Blenheim crosses the city boundary just before Clifton Terrace. The built-up area continues from that point all the way to Trafalgar Street, and includes pedestrians crossing the road to access the estuary, busy intersections, children travelling to school by bike, and many other vulnerable users of the road space, and areas alongside the highway. These are all users of the road corridor that are due to it being part of Nelson city. If it was truly open road, there would be much lower numbers of these road corridor users. As well as on-road cyclists, there are a wide range of everyday cyclists, people on e-bikes and the highest level of cycling activity anywhere in New Zealand [NZ Census]. The increasing volume of cycle traffic is such that the previous open road speed should be reduced to enable all road users, including people on bikes, to use the highway and the adjacent corridor in safety. This includes an increasing proportion of older cyclists with the ageing population.
5. We have noted that since the speed liimit reduction on the Appleby highway SH60 there have been no fatalities on that area of highway. Bicycle Nelson Bays considers that the increase in safety for all road users is a strong reason for supporting the proposed reductions. We would hope to see a similar reduction in fatalities along SH6 between Nelson and Blenheim. Most of us are both car drivers as well as riding bikes and we support the speed reduction to increase safety for all travel modes.
6. We are also aware that a large number of vehicle drivers do not support the reduction in speed limits along that stretch of highway. Generally, their arguments echo the ‘myths’ that have been objectively addressed by the NZTA. It would appear that their thoughts are more concerned with their own perceived convenience, and not the safety of more vulnerable road users who have the right to use the road corridor in safety.
7. We particularly note the argument by opponents of the speed reduction that cars are safer. Late model cars are generally safer for those inside the vehicle and those who are wealthy enough to purchase a new vehicle with all the safety features, but there is still a large proportion of older vehicles on our roads. Even the safest vehicle is no safer if it should hit a person on a bike. Only a reduction in speed to allow for sufficent reaction and avoidance time would increase safety for bike riders.
For all these reasons we seek a permanent reduction in speed limits along SH6, including an extension of the proposed 60kmh zone for the full extent of the built-up area from Clifton Terrace to the roundabout at the intersection of Trafalgar Street.

Stuff has recently released the election candidates responses to questions on the climate crisis(https://interactives.stuff.co.nz/2019/09/the-voting-climate/).

We've ranked our Nelson candidates based on their responses to some of the key questions below. Where candidates have the same answers we've ordered them alphabetically.

Note that we have focused on a selection of the questions and from this one survey. Please take the time to inform yourself on the candidates and for those candidates that have been on council before it's useful to take into account their past record. 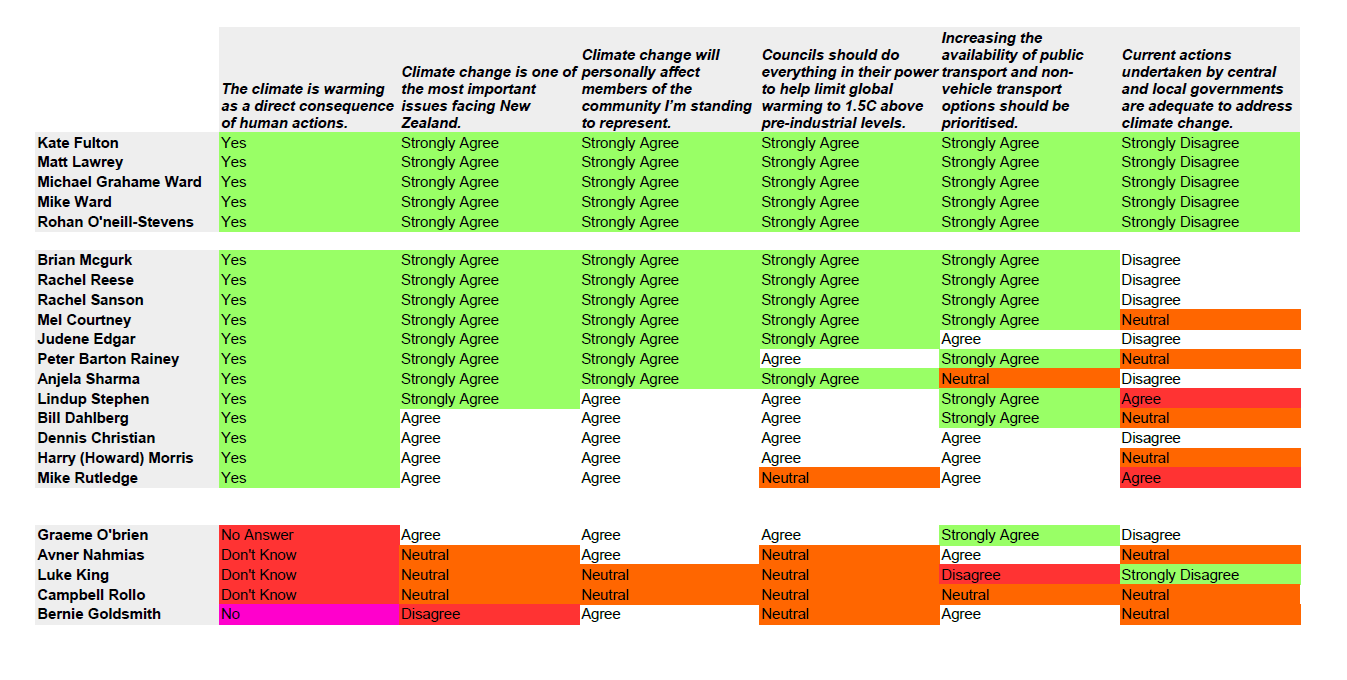