Sounds of the Southern Link ?

Sounds of the Southern Link ?

Cycling and Walking infrastructure is hampered by lack of investment, not because of the lack of a new highway. Unfortunately the desire by some to use this project as a political football has held Nelson back from being the city if could have been. The reality is that by focusing on this project as a solution to the regions woes, regardless of the social and environmental consequences, projects such as the St. Vincent St. cycleway have been severely compromised and the Rocks Rd. boulevard project delayed (possibly indefinitely). These compromises and delays reduce the uptake of cycling and also put peoples lives at risk. New roads do not reduce congestion. Reducing car usage does.

It is worth noting that there are four stages of assessment in the current NZTA investigation, and this is just the first stage which looks only at whether there is a problem worth considering further assessment, and not whether there are alternative responses to that problem, or if the potential solution of a new road would cause other problems to an extent that outweigh the advantages. Those assessments lie ahead.

Council held two workshops on walking and cycling issues last week, facilitated very well by Dave Allen and assisted by council staff. The information that came from these meetings will be fed into a set of principles and suggested outcomes that were developed by staff and elected councilors in an earlier workshop.

Overall there was a good deal of useful debate, and a number of participants echoed some similar themes - not least that the aspects of tension in some areas reflect Nelson’s success in building the numbers of people out there being active, but there’s a clear understanding that the implication of that growth might have been better planned and prepared for, with the result that  we now need to move into catch-up mode.

The first workshop focused on waking and cycling for transport and the second on recreation. BNB attended both, but took a more of an observer role at the second since in this area the Nelson Mountain Bike club and, to some extent, the Nelson Tasman Cycle Trails Trust provide leadership. The issues in the off-road/mountain biking area are in some ways similar yet  different to urban paths, and this is likely to be reflected in the application of some of the solutions (such as a more straight-forward application of specific-use paths), but the underlying issues involving (better) planned development and user responsibility will be the same.

With urban paths and routes the issues are complex; as a couple of participants noted, some shared paths carry a mix of different users in different sections at different times, and most providing an important amenity for large numbers in our community, so making these work better is unlikely to be a simple matter of banning particular user groups. This is particularly so when we look at the increasing number of more vulnerable people, like children and older, less experienced riders, for whom off-road shared paths are a necessary safe option. So the need to meet their needs, and the needs of walkers, should be pushing us to think creatively about how to provide options for the needs of faster and more confident riders, like experienced commuters and mountain bikers in a way that takes the pressure (and tension) of shared paths.

Most of this stuff is fairly obvious at a conceptual level so the devil will be, as is often the case, in the detail. It’s not quite clear what the process is from here, or what degree of consultation there will be in the next step(s), so we’ll keep you posted. What we will say is that we have been a little disappointed by the speed of progress in tackling this, and what it takes to get some issues on the Council’s agenda. BNB met with Nelson’s Mayor and the then president on Nelson Grey Power to discuss shared path issues in November last year, and pushed for an integrated approach to walking and cycling issues in our submission to the Regional Land Transport Strategy, also last year, so a little action earlier might have been a good move. 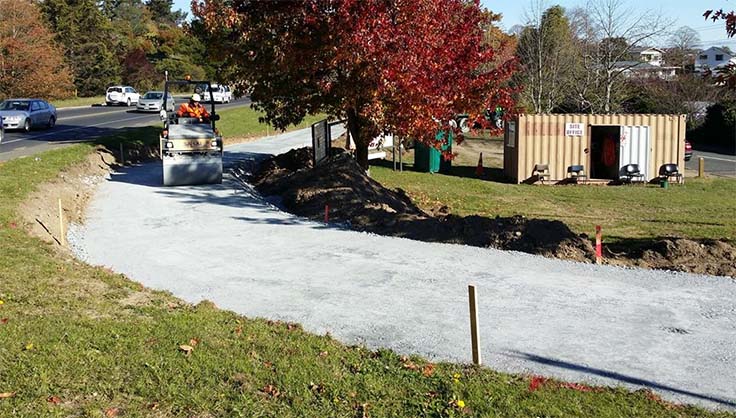 It's great to see the progress being made to the extension of the Railway Reserve at Beatson Ave. This work will provide the missing link to the shared path by creating an off-road route for cyclists all the way from Gloucester St. in Nelson to Saxton Fields, The Great Taste Trail and Queens St. in Richmond.
This route is also important as it links to Victory School, Nelson Intermediate School, Nayland School, Broadgreen School, and Garin College, providing a safe route for many children to get to and from school and reducing congestion on our roads at peak times. 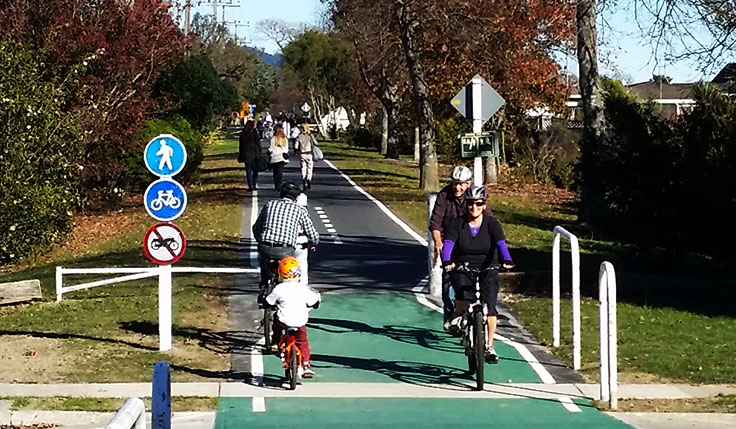 What are shared paths?

Paths that are intended to be used by walkers and cyclists (and wheelchairs, and pushchairs, and mobility scooters). Nelson and Tasman have a number of these in their urban areas and beyond. Our biggest shared paths are the Atawhai path, the Waimea Bypass path, the Stoke Railway Reserve path, and further afield, the Great Taste Trail. Some of these paths are very heavily used; user counts from 2010 showed some sections of the Stoke path had over 250 walkers and 200 cyclists just within the morning peak, and a recent survey indicated that over 50% of Tasman residents had walked or ridden the Great Taste Trail.

What are they good for?

Shared paths can be an effective way of providing an off-road facility for walkers and cyclists where space or funds are limited - not uncommon in Nelson and Tasman. Some key shared paths were essentially funded and built only because they would provide for cyclists; the Atawhai path and the Waimea Bypass path, for example, each attracting critical NZTA funding. The Great Taste Trail in Tasman was built as a cycling project but is used by walkers as well. A number of bush trails around Nelson and Tasman which were built for walkers are also used by bike riders, and some trails built for riders are similarly used by walkers.

Shared paths and spaces are increasingly used in larger cities like Auckland (Wynard Quarter waterfront development) and the Wellington waterfront, both carrying large numbers of users on foot or by bike.

Can a walkway be a shared path?

The Maitai path is occasionally referred to as a walkway, despite being an official council cycle route for some time. Other shared paths are similarly referred to as walkways at times(1), and the extensive raised platforms of the Great Taste Trail in the Waimea Estuary are labelled ‘boardwalks’ (2).

One of the North Island’s larger and most successful shared paths is the 12.7km Coastal Walkway running along New Plymouth’s sea frontage. This walkway is also a designated cycling route, and every photo on the city council’s official website page shows a cyclist on the path(3).

The answer to this is yes and potentially no. Many walkers of all ages use shared paths, but there is anecdotal evidence that some older walkers are intimidated by, or at least uncomfortable with, the behaviour of some cyclists. This can lead some walkers to withdraw from shared paths, which clearly represents a failure for achieving the facility’s potential if this situation is not addressed.

Shared paths often provide an off-road alternative for more vulnerable cyclists, like the young or more mature riders, and many mature riders only ride because they can use these facilities. Our region has a large number of more mature riders - a recent survey of riders on the Great Taste Trail revealed that most were in the 50-79 age group, and slightly over half were women (4).

What are the problems?

Most walkers who object to cyclists on shared paths identify problem behaviours which concern them, rather than the existence of cyclists as such. An obvious example of this has occurred in Wellington on its waterfront (5) and, as tends to be the complaint from walkers elsewhere, the issue boils down to some cyclists not riding appropriately for the environment. Some cyclists similarly cite problems with walkers who block the path or respond unpredictably to calls from cyclists that they are about to pass the walker, other users identify the risks posed by uncontrolled dogs - on or off the leash.

In some instances mountain bike trails have been built (with council approval) in areas previously used by walkers and the local community without adequate prior consultation by council. This creates subsequent conflicts between riders and locals/walkers.

In most situations of human conflict there will be some who define the problem in terms of a group of ‘others’, and present the solution as being the elimination of that group. And so it is with shared paths and cycling.

A more constructive and community-building - rather than community-fragmenting - approach involves a combination of planning, education and design-engineering. One Australian analysis of shared path conflict lists ten common sources of conflict, six needing to be addressed by community education, promotion and shared pathway etiquette, and three by design (6). Since shared paths are council owned and controlled spaces it is appropriate that these actions are council initiated and led. Real engagement and consultation with walkers, cyclists, and affected communities is critical.