Today (24th April) is the last day to send in feedback to the NZTA Southern Link Investigation. If you haven't already, please spend just a couple of minutes filling in the on-line form (https://www.surveymonkey.com/r/NSL-feedback) or simply send your thoughts to nelson-southern-link@nzta.govt.nz. Please also encourage your partner, children, parents, grandparents, friends etc. to send feedback too.

The focus of Bicycle Nelson Bay has always been to encourage active transport which we see as being a key component to creating a more liveable city. We do not support the building of a highway that will adversely effect the health and well-being of many people in Nelson, in particular those children at the schools and kindergartens along the route. Equally, we don't support approaches that encourage an increase in motor vehicles past existing schools and through our communities.

It is clear that our existing infrastructure is extremely inefficient and it's not working. Many journeys that are currently done by car are very short and could easily be made by cycling or walking. Additionally, we know that public transport has the potential to drastically reduce the number of vehicles on the road. Technology also has the potential of reducing the need for some journeys as does the layout of our city (inner city living for example). In essence, there are many ways that vehicle volumes can be reduced, especially with an increase in (predominantly elderly) population. If we want to create and attractive, healthy city that we can be proud of, we think this has to be the focus.

The feedback that Bicycle Nelson Bays submitted can be viewed here http://bnb.org.nz/images/docs/16Apr21-BNB-NZTA-SLiV3.pdf 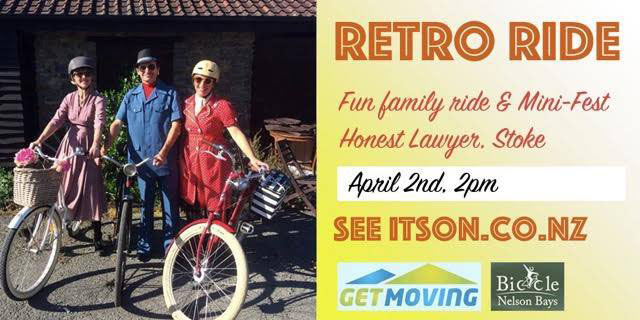 Retro Ride is an easy, kid-friendly loop of Nelson’s awesome bike paths, ending with a mini-festival at the Honest Lawyer venue and a FREE BIKE on offer.

Sponsored by Get Moving, Retro Ride is a family-friendly, sociable cycle round the off-road Great Taste and Railway Reserve bike paths -about 10km- starting & finishing at the Point Paddock of the Honest Lawyer Pub & Country where we'll have- 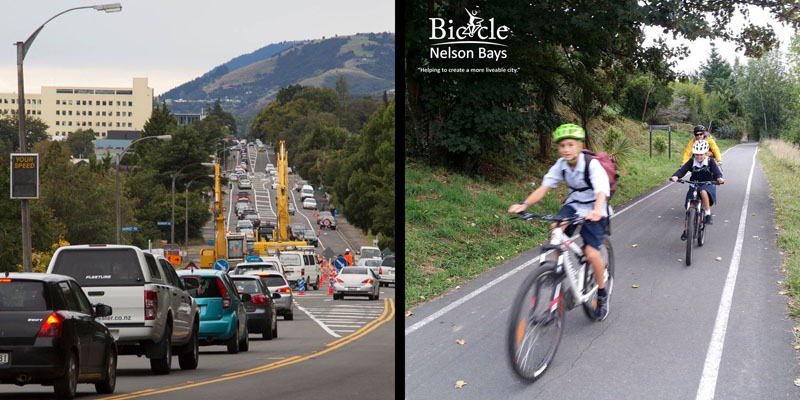 With the ongoing road works, particularly on Waimea Rd., why not try cycle commuting after the Easter weekend. The Railway Reserve and St. Vincent St. cycle way offer an easy, pleasant ride into town with no traffic queues. Arrive at work invigorated, less stressed and of course you'll be saving money and getting fit at the same time !

If you live too far out to cycle in all the way, why not put your bike in the car (or on the bus) and just cycle from Annesbrook for example.

The Great Taste Trail - It's not just for the tourists. 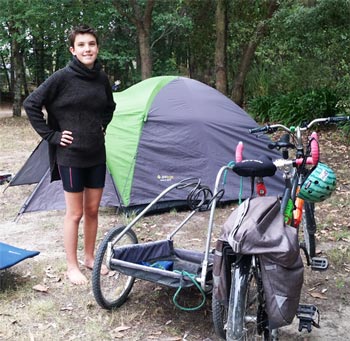 There is something very satisfying about packing up a bike trailer with camping gear and setting off on a cycling adventure right from your front door. OK, we were only heading to Mapua but that's a 70km round trip of quality cycling time with my daughter.

I'm still not sure how we got to this point. Despite my passion for cycling, both of my daughters have rebelled against it and are two of the most unenthusiastic cyclists. But here we were, me and my youngest, riding down Hardy St., albeit on a tandem, with a trailer full of camping gear in tow.

We'd set off at mid-day. With the knowledge that there was no shade until we reached Rabbit Island this was not ideal but the wind at least was favorable, for now. We headed down Vanguard and then St. Vincent Street and on to the Railway Reserve heading North West out of Nelson. As it was a week day the shared paths were relatively quiet and we had an easy run.

We reached Stoke and decided it was too early to stop at McCashans but we did then stop a bit further on for a cool drink at the Coffee Factory (and they kindly allowed us to fill up our water bottles from the cold water cooler too which was great). Then it was under the highway and what I consider to be the most unpleasant stretch of the trail as we cycled next to the 100km/h traffic. This stretch feels a bit safer now that the barriers have been installed but the noise means you can't talk to each other anymore. Thankfully this stretch is short and it isn't too long before we turn off the sealed path and we start the off road stretch of the trail.

We headed towards the sea edge and we soon realised it was high tide, really high tide. As we cycled over the board walks the waves were coming up through the gaps making our trip even more of an adventure. At this point I was glad that despite the good weather I'd put our sleeping bag and clothes in a dry bag in on the trailer and even fixed mudguards on the tandem before setting off. It was somewhat concerning to see how much of this coastline was being eroded despite the good intentioned but seemingly futile attempts keep the sea at bay by planting native shrubs along the shore.

The wind wasn't as favorable anymore but that didn't really matter, we weren't in any hurry. The last ferry from Rabbit Island to Mapua was at 5:10pm so we had all the time we wanted. As the wind picked up though I did start to wonder if it would still be running. The people on the wind-carts at the 'Vortex' were enjoying it though.

I knew there was a new coffee/ice-cream stop along the route, Taste Tasman RAW on Lower Queen St. Unfortunately on my previous trip they didn't have Eftpos. I can imagine that to an observer at the time it would have looked like the scene of a film as we thought we'd found a watering hole only to discover it was a mirage and we had been forced to continue on through the 'desert' without refreshment. This time though (despite thinking I must get some cash out just in case - which I hadn't), we were in luck and they now had an Eftpos machine. We enjoyed a well deserved break and a real-fruit ice cream which was delicious.

With our new sugar rush we were off again heading towards the Waimea river bridge. When we got there a lone cyclist was coming in the opposite direction so we waited. When the rider approached we realised it was Hugh Gully, the principal of Nelson Intermediate School where my daughter had been attending and so we chatted for a while. He tells us that whenever he hears that somebody is heading to Kaiteriteri he asks them if he can be dropped off with his bike so that he can ride back to Nelson along the trail. I ask about the ferry. "Yes, it's running but very busy" he tells us.

By now it's started to get cloudy which cools things down a bit. The wind is picking up too. I wonder if we're going to get rain. If it does I just hope that we get the to the campsite and get the tent up first.

We finally reach Rabbit Island. I give my daughter the option of cycling through the middle or around the outside of the Island (the latter being the 'official' Great Trail route). While going through the middle would have sheltered us more from the wind we decide to stick to the main route since we're towing a trailer and that route will be easier going. The ferry is not too far away now so we sprint up the Island.

When we get to the ferry's landing spot on the beach we have 45 minutes to wait which gives us time to have a picnic. Cream cheese and crisp(chips) sandwiches have become synonymous with our picnics recently and why not, we'd just cycled 35 km - we deserved it.

There had only been a handful of people waiting when we arrived but it wasn't long before many more people came. I started counting the bikes - there were about 25 now with more arriving by the minute. I looked at our tandem with trailer attached and started to worry we weren't all going to fit so I decided to txt the ferry's skipper. "Don't worry" he replied, "we'll make it work".

Sure enough, when the ferry arrived, like the animals of Noa's ark, the skipper somehow fitted us all in. A short ride later and we were on the shore at Mapua warf. It felt like rain was imminent so we headed straight for the camp ground.

With most people back at work now there was plenty of room at the camp ground. We chose an area under the trees and quickly pitched the tent just a short time before it started to drizzle. We'd made it.

We went back to the warf for dinner at 'Jelly Fish' then played ball back at the camp ground, watched some of Kath Bee's talent contest and as it started to get dark we played cards in the tent and then lay there reading alternate chapters of a book to each other until we were both too tired to read anymore. Life doesn't get much better than this.

A bicycle is not just for Christmas

OK, so you were lucky enough to get a new bike for Christmas but now is not the time to cast it to one side with your Christmas tree, now is the time to put it to work for you !