Can their really be any excuse for not knowing that the cycle way is there when coming in and out of these driveways ?

Unfortunately, while St. Vincent Street is receiving a lot of attention, it is important to bear in mind that people (often children) are hit by motorists in driveways far too regularly in Nelson. Motorists must take care when crossing cycleways/footpaths wherever they are, not just on St. Vincent Street. 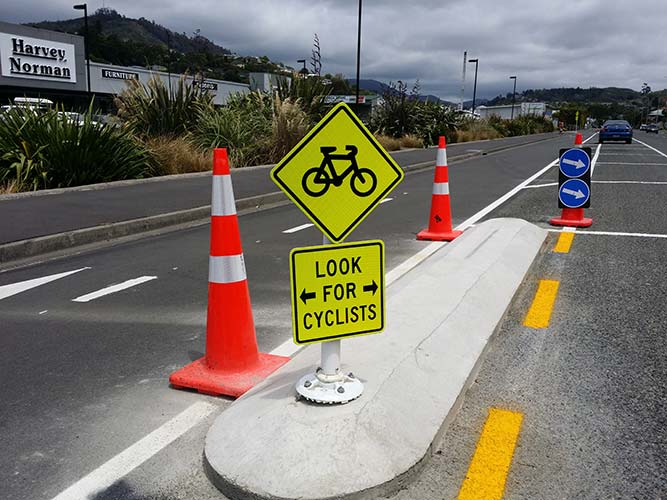 Coming to a smart phone near you ! The Active Transport Toolkit is a smart phone app developed here in Nelson in conjunction with Bicycle Nelson Bays and designed to encourage and support active transport. Cyclists (and pedestrians at a later stage) are being sought to be part of a Beta test program. The app is currently only available for Android (iOS version and a web version will be coming soon) but if you do have a late model Android smart phone with GPS we'd like to hear from you.

The theme for our last film night of 2014 is "Staying Active to Enjoy Your Later Years".

Although this film is primarily about Bill Cunningham and his photography, as an active 85 year old cyclist he fits very well into our theme. A great film if you haven't already seen it and worth seeing again if you have.

This is a free event (a gold coin donation to help cover the venue cost would be appreciated).

The Boathouse bar will be open from 6:30pm with the film starting at 7pm.

Waimea Roadworks and the Railway Reserve 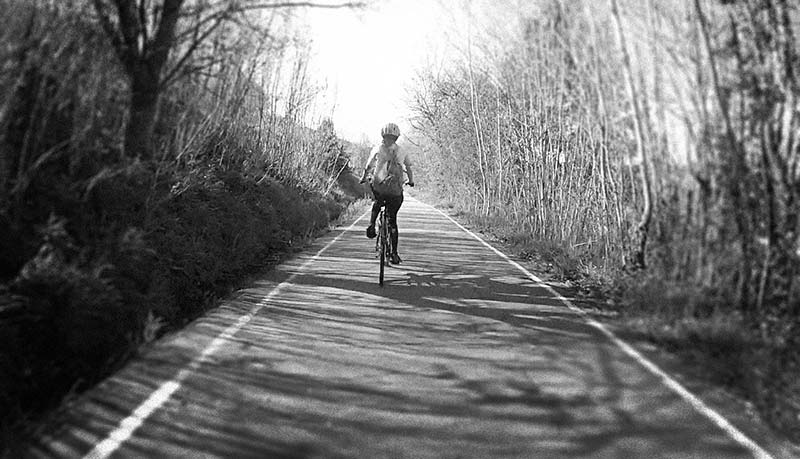 With all the roadworks on Waimea Rd. at the moment, it's a great opportunity to make use of our scenic Railway Reserve cycle/walking route when traveling to and from Nelson. Travel time from Annesbrook to the center of Nelson is only around 20 minutes by bike.

For information on this and other cycle routes around Nelson see the page on the Nelson City Council website http://nelson.govt.nz/recreation/recreation/cycling/bike-nelson-cycling-maps/.

The Rocks Road project, and the Southern link.

Let’s get this out of the way first: The Southern Link is an irrelevant distraction to the current Rocks Road project.

The new investigation into the southern link route will kick off sometime in late 2014 early 2015. Any subsequent consenting process is estimated to run for at least a further three years - if, and that’s a big ‘if’, the investigation finds that next step to be warranted. At the end of this process the SL project may be dropped, or it might proceed. If the project goes ahead it still needs to be built, which won’t be quick.

Meanwhile, work on Concept 2 (for instance) can begin without waiting around 4 years to see if the SL gets over all the hurdles, and then another 4 years or so if it does. If some version of Concept 2 is eventually approved Nelson would have this facility funded (a not insignificant step) and built regardless of whether the SL was approved - and funded - or not.

If the SL was built and heavy traffic is directed onto that, any change in the available road/path space would be minor and can be dealt with at this later time. Our Mayor has said we just need to get on with the Rocks Road project and we agree.

Both Concepts 1 and 2 provide a very overdue upgrade for walkers. Concept 1 marginally improves the existing on-road cycle lanes in a few areas.

That’s about it for Concept 1; a minor tweak will work fine for experienced, confident riders who don’t mind mixing it up with lots of fast vehicle traffic. But in Nelson the percentage of people who do their trip to work by bike is 8.2%, while the percentage of people who ride on Rocks Road is under 2.9%. This makes it very clear that what we have currently, and what’s provided by Concept 1, is only tolerated by a small subgroup of our existing pool of commuter cyclists. Meanwhile lots of other commuter cyclists stay away. So yes for $13 million you get a nice footpath, but why bother when we can get so much more?

Concept 2 is slightly more expensive (up to $15M) and yes it’s more complex, but it offers a great deal more. Like Concept 1 it gives walkers a good space, but it moves the facility to a whole new dimension:

1. By providing an off-road cycle path Concept 2 removes the major deterrent for people who are already prepared to cycle commute in Nelson but who simply won’t ride on this road - that’s the gap between the 8.2% of those currently commuting around Nelson and the less than 2.9% willing to take a punt on the on-road cycle lanes. Closing that gap means fewer cars.

2. Concept 2 opens things up to the much larger pool of people who would ride if the facilities were safe, but who aren’t riding to commute, or to go shopping, or to the beach - yet. What we know is that at least 45% of Nelsonians ride a bike, but obviously most of these people don’t commute or go shopping by bike. The main reason given by local people for avoiding the on-road cycle lanes is that they feel unsafe. Those percentage figures, and that reason, are surprisingly consistent across NZ and internationally. They all tell us the same thing; there are a lot of potential cycle commuters, shoppers and beach-goers out there waiting for safe facilities. And all the research tells us that ‘safe facilities’ means off-road. When safe, off-road facilities are installed, this latent or suppressed demand is unleashed. Want to see at least 10-15% fewer cars on Rocks Road? Without the off-road path of Concept 2 you won’t. End of story.

3. Concept 2 will mean that Tahunanui and Nelson will get the Great Taste Trail Riders and the slow-moving/high spend cycle tourists who our region is actively chasing. Why are trails like the Otago Central Rail Trail (around 17,000 users annually) and the relatively new Great Taste Trail (average of 300 riders per day) so popular? Number one reason from NZ and international research; these are off-road cycle paths. Will these riders and their spending come to and through Tahunanui, and flow past the Rocks Road businesses and into the central business district when this link to town is on-road? No. So, sorry about that Tahunanui businesses and accommodation providers, and shops in the CBD. Meanwhile, Tasman accommodation, cafes, and shops send you their warm regards. (2012 spending estimate from the 12,000 people who rode the full Otago Central Rail Trail; a bit over $12 million.)

Bicycle Nelson Bays acknowledges that for a small group of fast, experienced, confident riders, Concept 1 is the preferred option; Concept 1 keeps things nice and exclusive. But if we want to open Rocks Road to the rest of the Nelson community - to families, to tourists, and to more women riders - this means that a few riders have to make a degree of sacrifice for the many. And that means we need to look at Concept 2 for the basis of something rather stunning for Nelson.

BNB also acknowledges that there is work to be done in further developing Concept 2 - one area might be to retain more parking in key locations. What we all need to remember is that the detail in Concept 2 is a starting point for discussion and is open to change depending on the feedback. There is, however, a group of people in Nelson who have always opposed any boulevard-style improvement of Rocks Road. Their fear is that a successful facility will undermine their campaign for the southern link. The result, as we’re seeing, is an almost frenzied attempt to find any and every real or imagined flaw in the provisional detail of Concept 2 - a kind of ‘death by a 1000 cuts’.

We think that’s a good process to follow, and a sound economic and social investment for the whole Nelson community.

(If you know anyone who is unclear or may be misinformed about this project, please pass this information on. If you’ve already submitted feedback via the online form and now feel differently about the project you can resubmit your views - let them know you’ve changed your mind and why. Thanks! Feedback link here: http://nelson.govt.nz/services/transport/creating-travel-choices/rocks-road-walking-and-cycling/give-us-your-views/)