Some Clear Thinking on Rocks Road.

A perspective on the Rocks Road Shared Walk-cycleway

Nelson has a one-off opportunity to build a new pathway for walking and cycling around Rocks Road.

This project is part of a package developed by Nelson City Council to improve local walking and cycling. Much of the funding is coming from the New Zealand Transport Agency with the rest being provided by council.

Unlike the approach suggested by NZTA several years ago, this proposal doesn’t use some kind of disruptive ‘clip-on’ structure along the outside of the sea wall.

Space for a shared footpath and off-road cycleway will instead come from removing the existing on-road cycle lanes and, in effect, adding their width to the existing footpath space.

The current on-road cycle lanes can feel unsafe and unpleasant for cyclists, so we think a lot more people, including families and tourists, would be riding a path along our waterfront if this was off-road.

A wider pathway will also give walkers more distance from passing vehicle traffic.

Opposition to the idea

Some Nelsonians are opposed to both the proposal and, more disturbingly, even investigating whether this project can be done.

Much of this opposition is based on what’s claimed to be minimum widths for the walk-cycleway and the roadway. A combination of these widths apparently won’t fit on the Rocks Road footprint.

So what’s the reality about ‘minimum widths’?

The ‘rule books’ used in NZ for road and cycleway design are essentially guidelines, not rigid building codes. That’s why the State Highway Manual refers to ‘desirable minimum lane widths’.

But even so, the roadway width being quoted by opponents has some problems. One is that their chosen width won’t actually fit on some existing sections of Rocks Rd, or on parts of the state highway south or north from Nelson.

The second problem is that the width being applied is actually for roads with sealed shoulders, like the Whakatu Bypass. For roadways with kerbing, like Rocks Road, the 'desirable minimum' can be significantly less.

Opponents are also claiming that five meters is the minimum for a walk-cyclepath.

With cycle paths - and footpaths - more is always nice, but all cycling and walking advocates know that the pathway between 'the best possible' and 'the realities of limited space and money' is one called compromise.

As it is, the design guides used in NZ give four meters as the ‘desirable minimum width’. That’s the guideline the feasibility study will work with.

Ok, but is a two-way cycle facility ok?

And finally, opponents of the plan don’t like two-way cycle facilities.

In an ideal world - one without limits to space and money - we might make less use of two-way paths. But they work, and we use them here in Nelson.

A two-way, off-road shared path on this route would also be a vast improvement on what we have now.

What does this mean for the future?

This opportunity to tap into a NZTA fund to build an off-road cycling and walking facility around Rocks Road is effectively a one-off.

If the feasibility study shows the path is possible, but Nelson doesn’t proceed, it’s extremely unlikely that we’ll get this chance again.

We can either live with a narrow and underutilized path on our waterfront, or we can look at building something that allows Nelson families and tourists to cycle or stroll around the most beautiful harbour in New Zealand.

To apply the publicly stated requirements of opponents - their minimum widths and no two-way cycle path - would be to rule out the possibility of creating an off-road walkway-cycleway on Rocks Road in the future.

Nelsonians will remember that some people also opposed the Stoke Railway Reserve shared pathway when it was first suggested. This is now one of our prime community assets.

We believe that our region deserves to have this opportunity assessed - thoroughly and objectively.

We therefore support the Rocks Road Shared Walk-cycleway Feasibility Study, and we look forward to an open and informed discussion about its findings.

BNB representatives Chris Allison and John-Paul Pochin spoke to the BNB annual plan submission at NCC today. The original submission can be viewed at http://bnb.org.nz/index.php/docs/category/9-submissions?download=23:bnb-nelson-city-council-2013-14-annual-plan. The main points made by Chris today were as follows:

> Bicycle Nelson Bays is working closely with council in the Active Transport Advisory Group as Council develops projects for the extensive walk, cycle  and schools package.

> We see great benefit in the approach that council is taking with ATAG,  and we believe that  these projects will make a real difference to the way that people in Nelson move around this city to work, to shop and to play.

- The first involves changing some of our  transport habits by providing Public Transport as a real alternative to using private cars. The increasing use of the bus service affirms that step.
- The schools component of the walk, cycle and schools package is the second critical step in creating widespread change in our use of vehicles, especially at peak times.  We think this approach,  which focuses on our current  -  and on our future commuters,  has huge potential to improve the efficiency of our road network, and the health of our community.
- The third step is to make moving around Nelson by bike a mainstream choice, and not a marginal activity.

> A key part of this goal will be to match the off-road cycle path from Atawhai with a similar facility that connects Nelson to the south, - with its much larger population.

> We see a facility down St Vincent St. as a vital link between the railway reserve and the CBD.

> We’re aware that several of these projects are really complex and time - consuming for engineering staff.

> We’d urge council to look at allocating more engineering staff  to ATAG so the momentum of this programme can be maintained.

> Bicycle Nelson Bays affirms the work Nelson City Council is doing through the walk, cycle  and schools package  - and the ATAG process.

> In saying this, we want to be clear we are not anti-car we are drivers as well.

> We simply believe the research showing that communities  - and CBD’s especially - which are pedestrian and cyclist friendly are also commercially and socially healthy.

Following our Nelson-Richmond Railway Reserve Ride we got a phone call from Sarah Hodgson to tell us about a social group ride that she organises through Sport Tasman and Get Moving and she sent some information on the group today. The flyer can by downloaded here but the details are as follows:

Take in the sights of Richmond and beyond with this popular entry level social cycling group.
Gain or brush up on your cycling skills and learn how to maintain your bike.
Cycle skills & confidence training available.
All ages & abilities welcome and its Free!

We cycle on shared pathways around the region Wednesday’s between 1pm-3pm.

For more information and to express your interest please phone Sarah on 9232313 or Email Sarah.H@sporttasman.org.nz

We've been asked to share this message regarding the Matariki Lantern Parade in June (we will remind everybody closer to the time too):

The Matariki Lantern Parade is being held on the Victory Railway Reserve on Wednesday the 19th of June from 3.40pm to 8pm.
The section of the walkway being used is from the corner of Totara & St Vincent Streets to Beatson Ave.
During this time we are likely to have 600 to 800 people on the walkway participating in the event.
If you are on Victory Railway Reserve during this time please be aware of the participants and take care.

In addition we will have event staff working on the Victory Railway Reserve installing and breaking down art work and lighting on the following days and times:

There will be signage on the walkway when the staff are working during these times.

If you have any questions regarding this please contact me on 546 8389, email gareth@victory.school.nz

Yesterday we had a great email from Robert who, following a bike-car accident, decided to put pen to paper and write a poem about the experience. Thankfully this accident hasn't put Robert off cycling and he says that he often has illuminating thoughts while he's out on his bike. 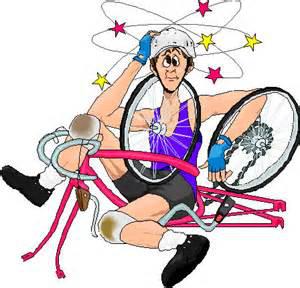 My handle bar, a useful bit
Just whipped away as quick as quick
My course an unplanned tumbling zed
Such things they often leave you dead

Maimed bike with cables all askew
Dragged home, a project to renew
My body though lies not in state
Still tough as nails at sixty-eight

And for escapee, note this well
Please see the flag and hear the bell
Neglect not then the view ahead
Refrain from planting foot of lead

One day you may enjoy the air
And understand the cyclist’s glare
Try cycling it’s not a sin
Be healthy, rich, avoid the gym