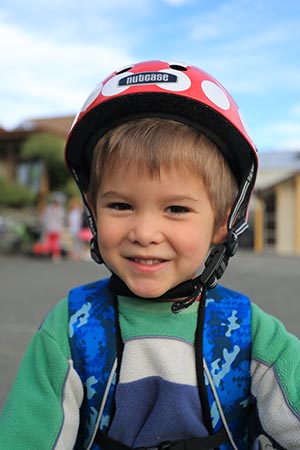 I came across Charlie while dropping my daughter off at school as he proudly rode his 'runner bike' down the path on his way to kindergarten with his mum. He told me he has another bigger bike at home - his 'rocket bike'. Charlie says he does like to ride fast but I was slightly disappointed to find out that the 'rocket' refers to pictures on the bike and not the propulsion method.

Charlie hopes to ride his bike to school when he's a old enough. Bare in mind, the current rules are that anything with wheels larger than the tiny wheels of his runner bike are not allowed on the footpath so please watch out for him.