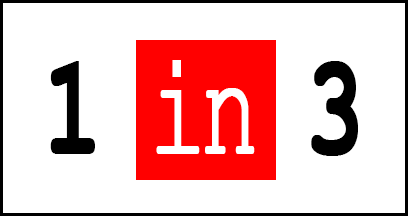 Last year, Chris Allison and I were discussing the number of people who cycle in Nelson. Chris suggested that 1 in 3 people cycle. It seemed like a crazy figure but he'd based this on the Sport and Recreation NZ surveys show that in 2001 15% of adults cycled in NZ (13% women, 17% men) and by 2007 that had increased to 36% in SPARC's Tasman region (Nelson/Tasman and Marlborough - 31.4% women, 41.2% men). This figure is now likely to be conservative, as it's 4 years old and the trend towards cycling growth remains strong.

So this got us thinking; if 1 in 3 people cycle then everybody must be quite closely connected with somebody who cycles even if they don't cycle themselves. Cyclists are not just disconnected strangers from another planet and one of these bright yellow two wheeled aliens may be your neighbour, your child's teacher, your boss or your best friend.

From this, the idea of a '1 in 3' campaign was born; A series of initiatives that would 'humanise' the cyclist.

The first stage of this is going to be to 'a face a day' showing the real face of cycling in Nelson: Over the next few weeks we'll capture photos and some basic details of cyclists around Nelson and we'll also get you to send in your own photos. Starting soon, each day we'll post a new photo and profile of a cyclist in our region on our website and Facebook.

Once we've gained a bit of momentum we'll then have a show of cycling numbers and support; We're going to invite every cyclist we can (and get you to invite every cyclist you can) to gather in one large group for a photograph with their bikes in the centre of Nelson. Make sure you're registered on the BNB website or keep a lookout on Facebook and we'll tell you where and when !

But that's not the end, following this, a number of  '1 in 3' branded initiatives will branch from this and continue to personalise the cyclist and hopefully soon we'll have the '1 in 2' campaign!