Writing 'Fact' in-front of a sentence doesn't make it true.

A particular lobby group has been publishing a list of 'Facts' through Facebook and on flyers, so we thought we'd see how well these facts stood up (note that we haven't missed any out, these are as they are numberd on the flyer):

Fact 1. "Surveys consistantly find that over 60% support for the southerm link..." - Simply not true (they're not off to a good start here) - The only statistically valid, randomly-sampled survey of people in Nelson on this issue was done at the request of NZTA and showed that the majority of people wanted options other than the Southern Link (https://www.nzta.govt.nz/assets/Uploads/NSLI-Public-Engagement-Summary-Report-Final.pdf).

Fact 2. "Freight volumes are forecast to increase 68% across the Top of the South by 2042" - True, but this is only a current prediction and the main growth in freight is expected to come primarily from Marlborough (https://www.nzta.govt.nz/assets/resources/draft-south-island-freight-plan/docs/draft-south-island-freight-plan.pdf). Heavy goods vehicles account for only 6% of vehicles on Rocks Rd. and NZTA are hoping to lower that through the MAX50 trucks for example - yes they are bigger, but only very slightly. They can carry an extra 6 tonnes of freight because they have an additional axle to spread the load meaning they have 'no additional wear on roads per tonne of freight' (http://www.nzta.govt.nz/commercial-driving/permits/high-productivity/50max/). NZTA's aim is 'more freight with fewer trips'. Additionally, freight volumes at the port have been pretty flat and NZTA states in the NZTA Strategic Case document "There is no indication of any significant growth occurring in recent years".

Fact 3. "Nelson's rate of population growth is 8% and 2nd only to Auckland" - The 8% figure is between the 2006 and 2013 census. The annual average grown this just 1.1%. Additionally, because the Nelson and Tasman population sizes are actually quite small, the growth in numbers is also very small. Crucially though, this recent growth is made up almost entirely of those aged over 65 (the growth of the older population in Nelson Marlborough is the highest of any DHB in NZ), an age demographic whose travel patterns are very different to commuters and younger residents.  (refs; What We Can Learn From the 2013 Census, Nelson Marlborough District Board, 2013; Nelson: Census 2013.A summary of key Census results. Nelson City Council, 2014). Additionally, despite our record regional population growth, vehicles on Rocks Rd has been on a declining trend for the last decade: there are now 2000 fewer vehicles/day around rocks road than in 2006 (see graph here from the NZTA Strategic Case document). 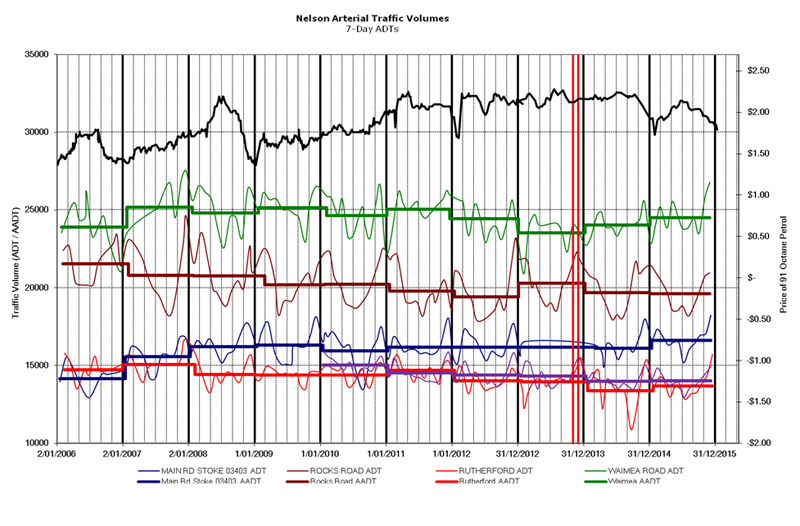 Fact 4. "More than half Nelson's population growth (55%) is occuring in Stoke" - Quite true, check out the massive expansion in retirement villages in Stoke. "Almost half (46 percent) of Nelson’s residents aged 65 and over live in Stoke, where they make up 22 percent of Stoke’s population” (Nelson: Census 2013.A summary of key Census results. Nelson City Council, 2014). A new inner residential zone would allow higher density living close into town, so people wouldn't be forced to live further out as they are now.

Fact 6. "A well designed Southern Link route will include an adjacent cycle way..." That may be the case, but we already have a cycleway and we want to keep it the way that it is. The Southern Link would remove a green cycling/walking corridor into the city and put a highway next to three schools, several day care centres and introduce a significant amount of pollution into airshed A which will affect thousands of people. An ‘adjacent cycleway’ isn’t just a loss of the existing facility, it’s a degrading of the level of service. The proposed replacement would be beside a state highway carrying logging trucks - which will now be climbing a hill, meaning more noise and pollution than on Rocks Rd.

Fact 12. "A pro-link council will make it easier to obtain Government funding for the new arterial route" - and the evidence? Claims made without evidence are by definition opinions, not facts. A pro-link council could make it difficult to implement alternatives that could negate the need for the link such as clearways.

Fact 14. "Rocks Rd. is the minimum 3.5m width allowed for a state highway..." yes, that’s why a widened footprint with improved cycle lanes and wide shared path is currently proposed (with SH in place, see point 6). Additionally, the width of the caridgeway varies hugely.  There are some places where indeed a generous shared path would be able to be built entirely on the existing caridgeway, but some of it would have to be built out over the sea. This is not difficult as Connollys Quay (the fishing Platform at Magazine point) has shown.

Fact 15. "A well-designed and purpose built arterial route will be safer because there will be fewer intersections..."  The route from Annesbrook  roundabout to the port via Tahuna has just one set of lights, the route over the Southern Link would have to have at least 4 (Toi-Toi, Glouster, Halifax and QE2 drive).

Fact 17. "The number of traffic movements on Rocks Rd. doubles during the summers' logging..." We're not sure where this 'double' figure comes from and we assume it's made up since the graphs that NZTA published in the Southern Link Business case document (see below) don't indicate anything like that. In any case, the vast majority of traffic on Rocks Rd. is cars (6% is freight). In summer there is a big increase in tourists and people going to the beach. This will still occur whether we had the Southern Link or not and could be (and should be) easily catered for with a dedicated 'beach bus'. 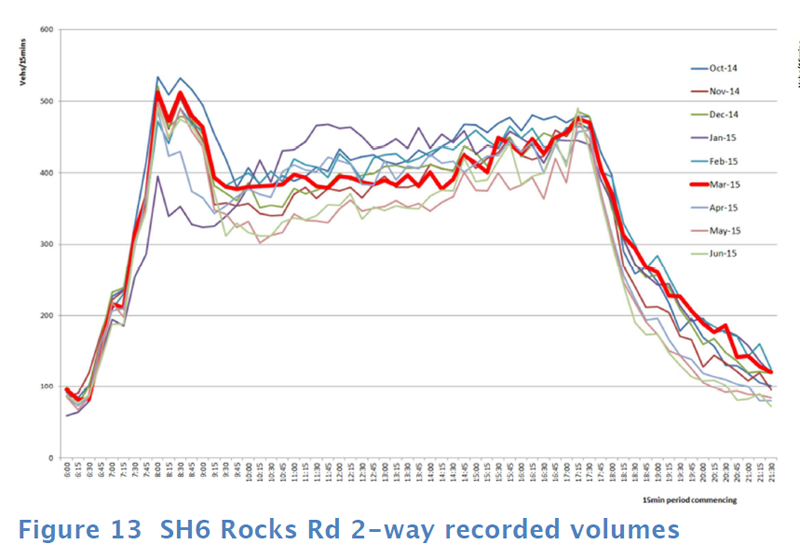 Fact 18. "Air pollution levels in the Victory airshed have reduced..." - We are barely meeting the terms of current National Standards for Air Quality.  But the really important point here is that the standard is wrong and under review.  The Parliamentary Commision for the Environment says we should be concerned about long term PM 2.5 exposure, rather than short term PM10.
Below is the graph from the Parlimentoy Commision from the Environment report on Air Quality in NZ 2015.  This is an important document as she is independent from government and from spin!
The graph attached is a screenshot from page 29 of the report, the only thing I've added is the underlining and arrow under Nelson (Airshed) A.
A couple of things to note about this is that Nelson (airshed) A (Victory) air quality is substantially worse than anything shown here for Auckland or Christchurch.
Lastly to quote from this study:

“When evaluating the WHO Air Quality Guidelines and interim targets, it is generally recommended that the annual average take precedence over the 24-hour average....”42

In addition, it is now widely accepted among air quality scientists that PM2.5 concentrations are a better indicator of health impacts across the population than PM10 concentrations. This is because the smaller particles are, the more damaging they are to human health.43

It follows that although all four guidelines are important, the most important is the guideline for long-term exposure to PM2.5."

So the PCE couldn't be more clear long term PM2.5 is the most important measure and Victory is 40% over this gudieline (A note here the NZ Standard for Air Quality is in terms of SHORT term PM10,s, there is no NZ standard for PM2.5, shot or long term - the PCE says there should be - the finer particles (PM2.5 is Particulate Matter 2.5 microns or smaller, PM 10 is 10 microns) are much worse for your health, not just lodging in the airways, but the ultrafine particles (PM1.0 and below which make up some of the PM) can even penetrate the gaseous membranes in our lungs and get into our blood.
It also needs to be noted here that the source of the particulate matter is important - The Envir. Court 2004 into the Southern Link was presented with evidence (attached below) that the "nasties" adsorbed to the surface of the carbon particles were a factor of 10x worse from diesels than they are from woodburning.  This is not to suggest that woodsmoke is benign, just that diesel PM is much worse.  The Envir. Court didn't rule on this particular bit of evidence, saying they weren't provided with enough information (at that time) to show the suspected worse health outcomes from the greater PAH numbers. 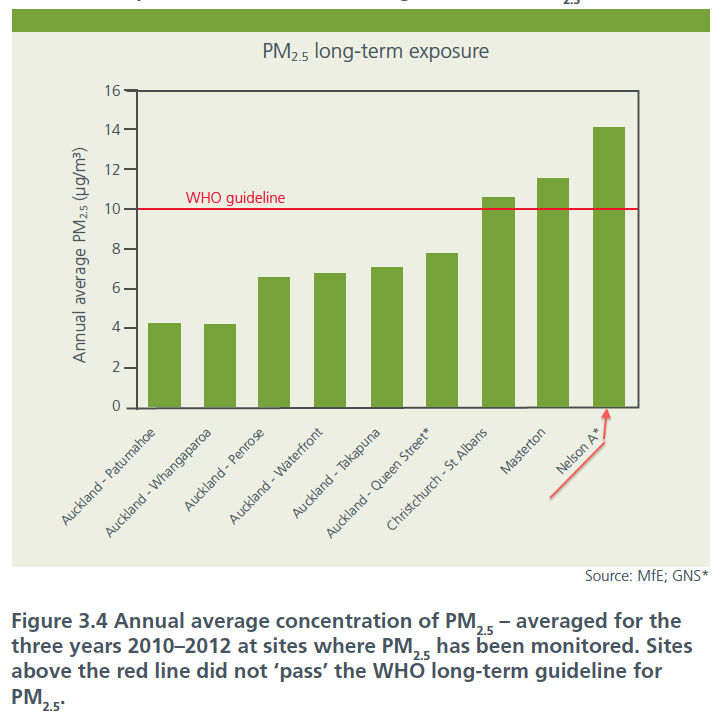 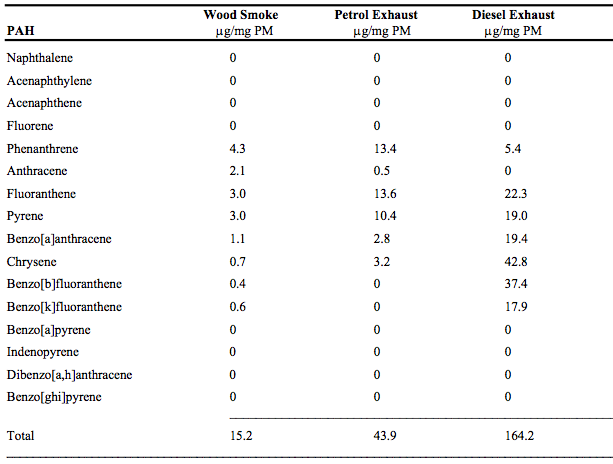