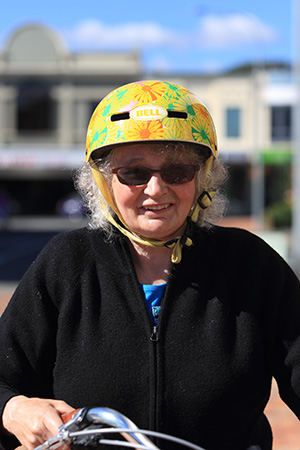 It was Bernie's cool helmet that caught my attention as I was cycling to the office so I stopped and asked her if she'd be our Face of the Day. She told me she cycles everywhere; "this is my car" she said indicating her bike, "I shop with it and I go to work on it". I commented on how nice her bike was and she told me that her friends at The Cawthron Institute had bought it for her and then I realised I recognised her from a newspaper article a little while back; She couldn't afford new glassed so they saved up for her but by the time they'd raised the money she'd managed to save up for a new pair herself so they bought her a bike instead. It was great to hear how useful the bike has been to her and how proud she is of it. A very big thumbs up to the people at Cawthron who helped out Bernie.